Commander Darius the Great: Towards Europe 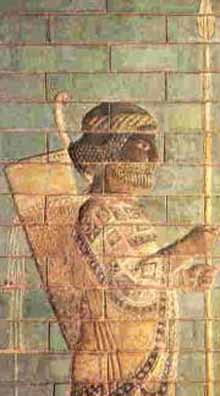 17 days after Nowruz, Iranian troops invaded Southeast Europe via the Sea of ​​Marmara.

In 514 BC, 171 days after Nowruz, General Paghabi began to cross the Sea of ​​Marmara to expel non-civilized tribes from the territory of Iran in southeastern Europe. Darius, the king of the time, was in northeastern Iran at the time, and had made Bughabish his agent beyond the country’s northwestern borders.
In their writings, ancient Greek historians have described the ranks of the Bogabish Corps and paid special attention to the specialization of the units that were new to them. The historians have written in the description of the spear-wielding infantry of the then Iranian army that the Iranian infantry had long, uniformed uniforms, and that the soldiers of this category were behind their shoulders. This description is equivalent to the statue of a soldier found in the archeological excavations of Susa in the early 20th century, a sign that Iran was advanced 25 centuries ago, the only superpower in the world at the time.
In less than two years, General Bogabish captured areas in Europe less than two years north of the Aegean Sea (lands between the Black Sea and present-day Republic of Macedonia) and drove non-civilized tribes across the Danube. In addition, he added areas in the Danube Delta and its north (Romania today) to the territory of Iran and continued to advance towards Ukraine today and …. (Taken from the Rosenamak website, Noshirvan Kayhanizadeh)