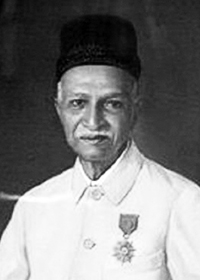 November 9 commemorates the 149th birthday of a great man and benefactor in the history of Zoroastrian, Pashootan Ji Dusabhai Markar, a Persian merchant who lived in India and dedicated his property to provide welfare amenities and educational facilities to Iranian Zoroastrians and Iranians. Many of his charitable donations can be seen in the cities of Yazd, Kerman, and Tehran. “Markar” name is a symbol of construction and prosperity for the people of Yazd, that shines on the face of the city from the past until now, and is considered as an identity of this province.

Pashootan Ji Dusabhai Markar was proficient in Farsi, Gujarati, Hindi, and English, and was always a successful merchant and amassed great wealth through trade. From 1925, Marker became successor to the director of Iranian Zoroastrian Anjuman of Mumbai. He handled the issues of Zoroastrians inside Iran directly and was the director of this complex until 1938. He continued his works with special attention to the Internal Affairs of Iran. Pashootan Markar, indeed, can be considered as one of the greatest righteous and the most influential people in the history of Iran regarding the modernization and culture of both Zoroastrians and Iranians association.

By establishing Marker girls’ and boys’ schools in February 1928, Pashutanji Marker took the first step towards literacy of the children of Yazd. He also founded Markar High School in September 1933. Markar founded the Markar Orphanage in 1922.

This orphanage was located in the building of ‘Arbab Rostam Shah-Jahan’ until 1926, and then was moved to the building of the ‘House of Shirazis’. He showed his affection for extending culture in Iran by construction of an orphanage, Borj-e Sa’at-e Markar (Markar Clock Tower), and the statue of Ferdowsi in Tehran in 1934.

Some of the donations and financial endowments of the late Markar (May his soul rest in peace) include:

It is said that Pashootan Ji Dusabhai Markar walked instead of using the subway for urban traveling, and he said that he wanted to help Iranian students with the money of transportation. The great Pashootan Ji Dusabhai Markar passed away in October 1965 in Mumbai, and after him, Mirza Soroush Lohrasp became the administrator of these schools and institutes. He continued to serve the Iranian society and the association of Zoroastrians.

Markar was an example of a thousand Behdin (of good religion) who have always sincerely tried to build their Ahura homeland with purity and sincerity, and have kept the feature and identity of their and other coreligionist’s religion alive.

The oldest historical document of Iranian cinema has been…

UNESCO requested a report from Iran on the threat to Chogha…

The oldest historical document of Iranian cinema has been…