Passing by the ‘Arbab Jamshid’ Street; One with Thousands of Memories 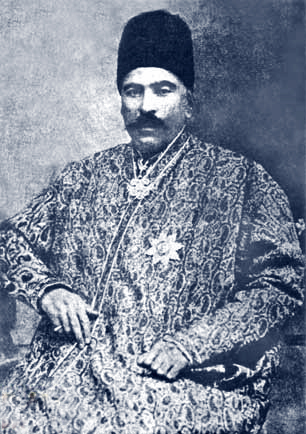 Humans step into this world one day and leave it another day. Many of these people have been forgotten. But, on the other hand, those who have good personalities become immortal and their name will last forever.

Their great thoughts and tireless efforts will be cause of better life to posterity. Jamshid Bahman Jamshidian, also known as Arbab Jamshidi, is one of the righteous and trustworthy Zoroastrian famous merchants. With integrity and persistence, he gained people and governments’ trust, and people from every social classes-merchants and even nobilities turned to Arbab Jamshid for their business. Therefore, he became the head of Zoroastrian merchants and received a badge in 1903.

On the southwest side of the old square, there is a large house, and the deciduous trees’ leaves and branches of its garden adorn Arbab Jamshid Street. This house belonged to Jamshid Jamshidian, a Zoroastrian merchant, who was known as Arbab Jamshidi. He was born in Yazd in 1850. He started working at age 11, and had his own trade center by the age of 20. He traded clothing, fabric, and dry goods, and then became a banker.

Thus, he became one of the famous merchants of Tehran at age 35, and a popular person owing to his services to the people and helping the poor. His charitable works can be compiled into a book.  His good deeds include caring for and feeding the indigents, building schools, helping to hold the mourning of Muharram for Imam Hussein, repairing Tekyeh, and providing medical services to people in need. Arbab Jamshidi entered the parliament as the first Zoroastrian representative and was one of the founders of Bank Melli Iran, and many people invested their money in this bank due to his reputation in the market.

Eventually, the conspiracy of Arbab Jamshidi’s rivals, the Royal Bank of England, and the Loan Bank of Russia led to his bankruptcy. Although he lost a large part of his wealth…»

What you read above is part of the report ‘Arbab Jamshid; the Street of Thousands of Memories’ written by Elaheh Kefayati in Hamshahri Online on November 8th. She researches the identity and tourism capacity of an old  shopping center:

In the middle of Manuchehri Street, after passing halfway through the bags and suitcase stores, slow down your steps; you are passing through travel memories, and the regrets of not traveling!

Here, time passes slowly, stops, and returns…the blue sign of ‘Arbab Jamshid Street’ is a reminiscent of history. If you look at this piece of land in Tehran carefully, you will see a diamond on the ground.  If you listen carefully you will hear the sound of memory from all four directions, and when you open your heart, you will find the dried purple tree impatiently flowering.

Now, while many years have passed since Arbab Jamshid Street was a crowded place, this street has become an isolated and quiet shopping center now. However, its buildings still have traces of

Qajar and Pahlavi architecture. Thousands of memories are hidden in their bricks and they have been a part of the history and events happening in this street and neighborhood.

Years before the unmanaged outward growth and expansion of Tehran, Abab Jamshid Street was located on the northernmost point of this city during the reign of Naser al-Din Shah Qajar, and it was part of Zahir-o-dowleh gardens in the maps of Abdul Ghaffar (scientist, astronomer, and topographer of Tehran in Qajar period).

From the Qajar period upto the first Pahlavi period, with the changes in urban structure, the gardens gradually turned into a residential context, and as time went by, more urban, architectural, and social changes were visible. Despite all these changes, Arbab Jamshid Street has retained its original form, and accommodate noteworthy buildings that have become part of the identity of old Tehran.

Two and three story brick buildings can be seen at first glance which are symmetrical and represent architectural movements from the central courtyard houses to modern architecture. The farther we go, however, the more architectural diversity we encounter.

In the middle of the street, there is an intersection which was known as Meydangahi (square) or Meydancheh in the old days. The documents obtained by the map of old Tehran have determined the age of square to be about 200 years.

On the southwest side of the old square, there is a large house, and the deciduous trees’ leaves and branches of its garden adorn Arbab Jamshid Street. This house belonged to Jamshid Jamshidian, a Zoroastrian merchant, who was known as Arbab Jamshidi. He was born in Yazd in 1850. He started working at age 11, and had his own trade center by the age of 20. He traded clothing, fabric, and dry goods, and then became a banker.

Thus, he became one of the famous merchants of Tehran at age 35, and a famous person owing to his services to the people and helping the poor. His charitable work can be compiled in a book. His good deeds include carrying and feeding the indigents, building schools, helping to hold the mourning of Muharram for Imam Hussein, repairing Tekyeh, and providing medical services to people in need. Arbab Jamshidi entered the parliament as the first Zoroastrian representative and was one of the founders of Bank Melli Iran, and many people invested their money in this bank due to his reputation in the market.

Eventually, the conspiracy of Arbab Jamshidi’s rivals, the Royal Bank of England, and the Loan Bank of Russia led to his bankruptcy. Although he lost a large part of his wealth…»

While he lost much of his fortune, he never became poor contrary to some claims. This can be proven by simply taking a look at his private residence, with an area of several thousand meters, which still exists in the same quarter, and now belongs to his heirs. This street is named after a well-disposed man that now includes important parts of the Arbab Jamshid neighborhood.

On the north side of the Meydanche (square), there is a three-storey building in front of the Arbab Jamshidi’s house with a sign of ‘union of tailors’, which attracts more attention.

Built during the first Pahlavi period, the building belonged to Hasan Khan Motazedi, and was also used as a film studio for some time. Among the decorations and architectural features of the building are stairs with a double roof and a cement edge above the windows.

The Girih tiles of doors and Persian colorful glasses (Owrsi) show the originality of Iranian architecture. Elham Kaviani, an architectural expert, describes the building:” On the south side of each story, there is a porch with a sloping roof. The first floor remains the same, but the second and third floors have been repaired over the years. The windows of this building are made of wood, and some of them that open to the street have a circular shape.

Nevertheless, what is more attractive to the viewer is the 6 columns placed in front of this mansion. These cast-iron columns with 150 years of history are the remains of 52 columns of the winter mansion of Dost Mohammad Khan Moayer-ol-Mamalek (Naser al-Din Shah’s son-in-law) in the village of Mehrabad (the current location of Mehrabad International Airport). Dost Mohammad Khan, who ordered these columns from the French company, Voltaire, unfortunately, lost his winter mansion, and after the destruction of that mansion, these 6 columns adorned this building in Arbab Jamshid Street.

These columns have duet ornaments in pedestal, body, and capital. There is an inscription at the bottom of the columns, and the name of the manufacturing company (urban furniture company, Voltaire) and the name of Dost Mohammad Khan Moayer-ol- Mamalek is carved on it. These columns are cracked and gradually destroyed, and the traces of fire smoke lit by the passengers near the columns have blackened them.. The columns need to be restored, repaired, and ameliorated so that they can still stand and shine like a jewel on a ring in Arbab Jamshid Street.

Regarding the necessity of the protection and maintenance of these columns, Kaviani says:” These columns have been painted and damaged in different periods, similar to other urban elements such as city fences. Restoration of these columns is a project of restoration of ancient metals. To prevent demolition, the degree of the cast-iron’s hardness must be diagnosed by a laboratory and restored by experienced experts.

Arbab Jamshid Street is not doing so well

It’s hard to believe that this street with this level of glory and beauty is so deserted that no one remembers it except the locals. Its valuable buildings seem to follow the fate of Taq-e Kasra (Iwan-e Kasrā), and the street is occupied by bag, shoe, and clothing manufacturers. In this regard, we talked to some of the locals, asking their opinion about this issue.

“I have been here 80% of my life! It was a thriving and bustling street! Look at it now! It has become a gloomy quarter! Look at the windows and architecture of buildings! We could not bring ourselves to change these buildings. This street should become a cultural place, an ecotourism resort, or a Qadamgah (the place of stepping; it is believed to be a footprint attributed to an infallible or a prominent religious figure or a place where a holy person is thought to have stepped in). In winters, the street becomes muddy, and it is very difficult to pass the street. This street, Arbab Jamshidi, is not in good shape! And nobody cares about tha”, said Ali Sadeghi, one of the old residents of Arbab Jamshid street.

All old residents of the street know Mohammad Shamsayi. He is an expert in Iranian carpets and has been selling carpets in Arbab Jamshid Street for more than 50 years. He sits among the colorful rugs and yarns, and while combing on a rug loom he says:” Those days are not comparable to these days! I also had a carpet shop at that time. This street was bustling. Luxury cars came here, and people were filming everywhere. But this street has lost its glory for years now”. Holding a hook of carpet weaving, he points to the street with his other hand and says: “There are holes that would destroy cars falling inside them. The authorities should take care of these problems, plant flowers in the four corners of this square, and it should be cobblestone‎. What is the difference between Arbab Jamshid Street and 30th Tir Street?”

Due to his carpet trade, Shamsayi has many experiences traveling abroad. In this regard, he states:” I went to Europe! I went to Paris! They made streets like this very beautiful. Tourists came there, saw and enjoyed them. When I saw it, I regretted that our neighborhood was not taken care of. If a tourist came here, they would twist their angle on the sidewalk. Iron bridges are broken. So far, people have repeatedly stepped on these bridges and been injured. The municipality promised several times to repair and rejuvenate this street, but they did not make it happen! I cannot say enough about the negligence toward this street.”

While the residents of Arbab Jamshid neighborhood complained about lack of attention to this neighborhood, it felt like they were used to the street’s conditions, similr to Little Prince, who was tamed by the flower!

Mobed Dr.Ardeshir Khorshidian: “We make the religious principles to the scientific belief”