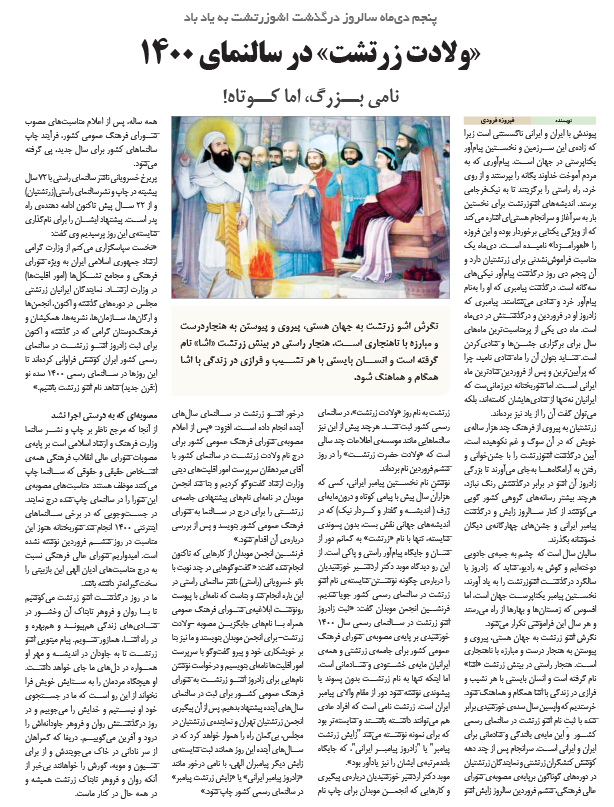 His bond with Iran and Iranians is inseparable because he was born in this land, and he is the first messenger of monotheism in the world. A messenger who taught people to worship the one God, and to choose the right path with the help of wisdom, in order to gain happiness. December is of great importance of Zoroastrians, because 5 December is the death anniversary of the preacher of the three virtues; a  messenger known to bring us the message of wisdom and joy.

He was born in March and died in December. December contains most of the events and celebrations of the year.  It could be called the happy month because it is the most celebrated month among Iranians, and after March, it has the most ceremonies.  But unfortunately, it has been a long time that Iranians have not only reduced their happy occasions, but we can say that they have actually forgotten them.

For many years we have been sitting and staring at the magic box or listening to the radio, in the hope that there is some mention of the birth and death of Zoroaster, the first monotheistic messenger in the world, but alas, winters and springs come and go and this silence is repeated each year.

We are glad that the last year of the solar century coincides with the registration of Ashu Zarathushtra’s name in the official calendar of the country, and this is a source of pride and joy for Iran and Iranians. Finally, after decades of efforts by Zoroastrian activists, and representatives of Zoroastrians in various periods, based on the decision of the Supreme Cultural Council, the 6th of Farvardin, the anniversary of Zoroastrian birth, was registered in the official calendar of the country.

What you read above is a part of an article entitled “Birth of Zoroaster in 1400 Calendar” written by Firouzeh Foroodi, and published in the latest issue of Amordad.

Readers can also use the following ways to access Amordad Weekly also at the newsstands and agencies.

Zoroastrian Cultural Heritage in exhibitions and museums of Anthropology