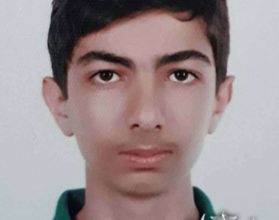 Physics Olympiad is an annual physics competition among thousands of 11th-grade volunteer students. This competition was held in 3 parts. Arian Bastani, a Zoroastrian student, won a silver medal at the National Physics Olympiad after passing scientific and laboratory tests.

Arian Bastani, son of Gita Mandegari and Fariborz Bastani, is 18 years old and is currently studying in the 12th-grade of Mathematics and Physics At Allameh Helli 1 High School for Talented Students in Tehran. He also completed his middle school education at Allameh Helli High School and He started his education in Jamshid Jam elementary School.

He talks about his motivation for studying physics and participating in the Olympiad: “I wanted to focus on one topic instead of several, and I chose this field because of my interest in physics. My main goal was not just to get results but also to learn; From 2 years back I started planning to study the different physics parts, and setting a timetable for this subject, until finally the last stage of this exam was held in fall this year, and the Physics Olympiad Scientific Committee announced the results.”