In the latest archaeological excavations 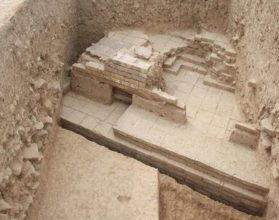 In the latest archaeological excavations

After ten years and in the last season of archeological excavations, the joint Iranian-Italian group proved that Cyrus, the founder of the Achaemenid Empire, ordered the construction of the Parseh campus gate. This magnificent gate was exploited during the reign of his son Cambyses.

According to IRNA, from 2012 to 2020, a joint Iranian-Italian archeology group led by Pierre Francesco Caliri from the University of Bologna and Alireza Askari Chavardi from Shiraz University, in 10 season’s archaeological excavations, discovered an extensive collection of archaeological documents from this area.

The gate discovered in the area of Tal-e-Ajori is located three kilometers northwest of Persepolis. It is about 30 x 40 sqm and about 12 m high.  The building has a corridor in the center, a rectangular room measuring 7 x 12 sqm.  Inside this room, 4 sitting chairs were found.  The center hall opens on both sides to the Achaemenid Pardis (campus).

The material used in this gate is clay and bricks, and its interior and exterior are decorated with colored bricks. The lower part and the plinth of the walls were carved with lotuses, the body and the facade of the wall were decorated with colorful panels and legendary animals carved on them, as examples of the beliefs of acient Iranians, Achaemenids, Elamites, and the people of Mesopotamia; but most important were the inscriptions in Babylonian and elamite scripts found in the central room.

A structure to commemorate the conquest of Babylon

Alireza Askari Chavardi, an Iranian archaeologist and supervisor of Parseh Brick Mound excavation team, said: “The collection of written documents, building materials, motifs used in decorating the building facade, dating of carbon-14, and aspects of sanctity and access to this gate shows that this building was built after 539 BC in honor of the conquest of Babylon. It was made by order of Cyrus the Great.”

The professor from Shiraz University added:  “During the reign of cyrus the Great, his son ruled over the city of Babylon for 8 years, and became Iran’s king in 529 BC.

He pointed out that Cyrus achaemenid ordered construction of this gate because of his conquer of the most important city in the ancient world and also because of its religious significance.  He continued:  Because of his interest in Babylon, his long acquaintance with the Babylonians and its cultural connection with the ancient world, his son, Cambyses, continued the work of building the large Parseh complex in the Babylonian architecture style.”

According Askari, the archeological group is trying to turn this site into a museum site that everyone can visit. For this reason extensive security measure are being taken by the Ministry of Culture, Heritage and Tourism, The Persepolis World Heritage Organization and the Izmeo Institute of Italy, to protect this site. The program of exploring and organizing this critical ancient site will continue until the end of 1399 AH.

The director of the Persepolis World Heritage Site also spoke about the various stages of archeological excavations carried out by the joint Iranian-Italian group in Tal-e-Ajori and added: “We started the 10th season of excavation in the tal-e-ajori site in December, in continuation of the previous excavation seasons, until it is completed, for preparing the site to display its invaluable historical hallmarks to visitors of the complex, it continues.”

Hamid Fadai considered this excavation as a joint venture with international collaboration in the archeological sector, with the aim of exploiting this historical area, and the structures and the unique historical buildings of the Achaemenid era for presenting to Iranian and foreign tourists, and added:  “A protective roof is being erected at the same time, over this historic site, and it is hoped that in the near future can be put to display as an important museum site.

The Director of Persepolis World Heritage Organization stressed on the fact that maintenance and development of various stages of exploitation of this historic site is an essential step for cultural heritage and tourism of the country, and added:  “This historic site near Persepolis contains important and invaluable evidence of the city of Parseh, will provide a tangible view of the achaemenid capital and can be considered as an important step in the development of tourism in the region.”

Tal-e-Ajri is a gate built before Persepolis and for the turquoise palace, which is destroyed today, in the area of the ancient city of Parseh. The building is located 3 km from Persepolis but is older than Takhtagah (Persepolis complex).

In previous seasons of archeological excavation in the Tal-e-ajori site, several historical structures and artifacts, consisting of enamel bricks with paintings of Iranian legends, which are comparable with those found in Shush and Mesopotamia, have been found. The historic site of Tal-e-ajori, situated near Takhte Jamshid, which is one of the structures belonging to the achaemenid era, has been registered as national heritage and with view to the historic and contents identity, it is an invaluable heritage.  The structures found in this area, are said by many to be built before Takhte Jamshid (Takhtgah).  The recent excavations fill the historic gap of Parseh City, especially during the reign of Cyrus and Cambyses and before the rule of Dariush Achaemenid, in 521 BC.