The Second Day in the Zoroastrian Calendar 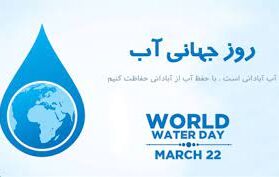 Today is the day of Vohuman Amshaspand and Farvardin in 3759 of Zoroastrians calendar, the first day of Nabor in the New Year, the day of abstinence from eating meat, the second Monday of Farvardin 1400 solar year, March 22, 2021 AD.

The conference wanted all countries to implement the UN Declaration No. 21 to raise people’s awareness about water. The 2nd of Farvardin, 1400, coincides with March 22, 2021, which is the international day of remembrance for valuing water as a source of life and development with economic, cultural, and social impact.

In addition to UN member states, many NGOs mark issues such as how more than one billion people have access to clean water or the role of men and women in the family in accessing clean water. Since 1993, a new slogan has been chosen about the vital and sensitive issues of the time so that public awareness activities can be planned based on that slogan. This year’s slogan for World Water Day, Farvardin 2, 1400, is “Water Valuation.” Because water has three vital, cultural, and economic values, this year, as coronavirus spreads around the world (COVID-19 pandemic), water consumption for continuous rinsing has increased significantly, with education focusing on water valuation.

The word in Persian that is spelt with “m-a-n” means character, mind and heart. Vohuman Amshaspand is the second day of each month in the Zoroastrian calendar. The word Vohu-man has two parts, namely, “vohu” means excellent and good, and “man” from the word “manah” means thinking, knowing, and understanding, and these two parts together mean good thought. Bahman is one of the features of Ahura Mazada, and he is representative of good thinking. He is also called Vohuman in Avesta.

He is the first creation of Ahura Mazda and is one of the greatest gods of Mazdyasna. In the spiritual world, he is a symbol of purity of thought and wisdom of God. He benefits man with reason and thinking, and knowledge and brings man closer to the Lord of the universe. Vohu-man is the great Amshaspand and the great God who comes to Ashu Zarathushtra’s dream and leads him to Ahura Mazda. Vohumannah reaches man good words and spiritually elevated speech, and prevents man from slander and cursing. He has good and divine (Ahuraie) thoughts, and is the first of the Amshaspand’s and protector of animals. Vohman (or Bahman) Day is the first “nabor’ day of the month in the Zoroastrian calendar, and Zoroastrians avoid eating meat on this day.  He also is in close cooperation with the Gods of Mah, Gosh and Ram.

Good thoughts lead all people of the world towards Asha (the path of honesty and truthfulness), and ill thoughts lead people to wander and turn them away from Asha.  In the Gathas, the scenario of freedom of thoughts and social democracy is clear and visible. Vohuman is so important in Mazde Yasni faith (Zoroastrian) that it is said to be the best life and can only be attained through Asha. The word Vohuman is mentioned 127 times in the Gathas. Zoroaster came to know God by the power of wisdom and the use of reasonable thought. Good thoughts or divine wisdom or Bahman is a symbol of the essence of the divine wisdom, and itself the source of wisdom.

Human Fravaheri: The texture of rationalisms in the message of Zarthustra to the Human Society