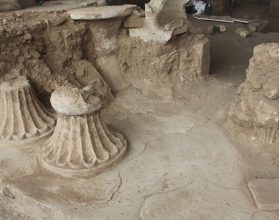 A large gypsum stage which has each two gypsum chairs symmetrically, pairwise on each side of the stage, the support of a middle firebox, and a gypsum round table used for ceremonies, are some of the latest findings in phase 2 of archaeological excavation in “Vigol” area is Aran-va Bidgol.

As reported by “Aria Heritage” and also by the public relations of the Cultural Heritage and Tourism Research Institute, Mohsen Javari, the head of the Archeology Department, announced the news today, May 31, 2021: “In the first phase of the excavation, which was done in 2010, the Chahartaqi (an architectural unit consisting of a chartaqi structure and the support of a middle firebox and a T-shaped stage were found in the space for performing rituals. In the new phase, the costermonger corridors located in the four corners of the central space were explored, which provides precious data from the Sassanid period.”

The archeologist added: “In the northeastern opening of the chartaqi, a large gypsum stage which has each two gypsum chairs symmetrically in pairwise on each side, a gypsum tripod with an upside-down identical palm design, the middle fireplace base of the construction and around gypsum table which was used for rituals, are unique in their kind, and compared to other similar artifacts collected for this area.”

He reiterated that all the remains of this stage were filled with adobe and mud, consciously and carefully, and these artworks were protected in the heart of adobe and mud.

Javari also gave the news of the discovery of the remains of a fireplace made of mud and thin gypsum cover in the northwest corridor. The large amount of coal and ash spread on the floor is evidence of fire related activities, and of the importance of this structure in its times and in the area of central Iran. According to the head of the Archaeological Board, four more gypsum pedestals were found in the southeast corner of the passage on the middle floor, which was carefully closed with bricks and mud after moving and stacking them together.

He described the method as similar to that seen on the northeast stage: “since the several other openings leading to this corridor are similarly made by placing gypsum foundations, it is clear that this measure was taken to protect these ritual objects before the construction was abandoned: with this method, they protect these objects.”

Javari stated that the southeastern side of this structure was connected to a porch, which formed the southeastern facade, and added: “Remains of the arch, which is built of adobe also exists, and there is not any other arch similar to this arch in any structure known so far and there this confirms that it is a special structure. He continued: “In this phase, an excavation of a multi-line inscription in Pahlavi script has been found, which is being studied by the Research Center for Linguistics, Inscriptions, and Texts.”

The archaeologist continued: “this structure for rituals, with regard to the data collected and to its dimensions and size, as well as its presence in Central Iran, shows the importance of this region in the Sassanid period; it is an area that is unknown from this point of view and requires new studies and perspectives in this field.”

In conclusion he said: “The important findings of this phase bring out the need for immediate allocation of funds for implementation of a special security plan and protection of this important structure of the Sassanid period, along with plans to turn it into a museum site for the public.”

Vigol is a region of about 120 hectares located east of Bidgol. In the middle of this historic region, there is a fire temple with a history of several thousands of years, which was inhabited in the pre-Islamic period upto various Islamic periods.