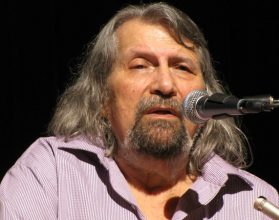 Esmail Khoi, a prominent contemporary poet, who had been ill for a while, passed away in London on May 25, 2021, aged 83.

According to the late poet’s daughter, he was hospitalized on Friday (May 21) due to severe pneumonia. Esmail Khoi was born in Mashhad, on June 30, 1938 (9th of Tir, 1317 Iranian official calendar).  From among his works we can mention a few, i.e., “Bar Khonak Rahvar Zamin”, “Bar Bame Gerdbad”, “Az Seday-e Sokhan-e Eshgh”, “Ma Boudegan”, “Nahang Dar Sahra”, “Jahan-e Digari Miafarinam”.

Esmail Khoi’s poems have been translated into several languages, including English, Russian, French, German, Hindi, and Ukrainian. He was fluent in English, wrote poetry in English, and published his collection titled “Vice of Exile.” Esmail Khoi is the first Iranian poet to win the Rückert Prize in Coburg in 2010.

He left Iran for London in 1984 and finally passed away in this city.

Persepolis, a Glory to the Heights of the History of Iran