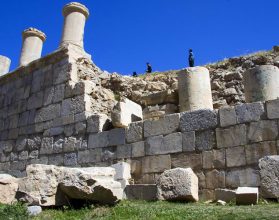 After years of neglect of the Anahita temple, after two decades, the reconstruction of the southwest corner of this historic temple has finally begun.

Anahita Temple is one of the tourist attractions of Iran, which is located in Kangavar city, Kermanshah province. This massive stone structure, which is said to have survived from the Parthian age, is one of Iran’s options for inclusion in the UNESCO World Heritage List, which needs more attention to take a step towards globalization.

In an interview with ISNA, Morteza Geravand, director of the national base of the historic Anahita Temple of Kermanshah pointed out to the starting of the repair operations in the south/west corner of the temple’s wall and said: “We have four rows of 12-meter-long walls in this part of the temple, the reconstruction of which is on the working schedule.”

He stated: “the reconstruction of the wall in the southern corner of the temple has begun from the first row of stairs with a length of 12 meters, and we have placed some of the stones and capitals in place inside these stairs.”

The director of the national base of the temple emphasized that this work is done by experts so that each stone can precisely be placed in its place. He added: “Of course, several stones have also broken, and we have taken measures to add it to the agenda to fill these gaps.”

He said:  “Considering that in ancient times, the stones of Anahita temple were provided by a mine nearby called” Chalmaran “mine, so we moved some uncut stones from that same place, but the difficulty we are facing now is the carving of these stones.”

Garavand added: “Even though we will use modern equipment to cut these stones, it is important how they are cut.  In this regard we have called some retired experts of the temple, who were trained in Persepolis many years ago to cooperate with us.”

He reminded: “in the first row of the set of stones placed on the wall, four “clean-cut” stones have been destroyed, to complete which new stones must be cut. And we must have alternative stones for them; we have to put the rocks in their main place in the exact dimensions, size, etc.

Of course, so far, we have only worked on the first row of these walls, and to do the second row, we need to rent a crane to move 35 tons of stone for us, which requires more costs, and we have to provide funds. Or, to continue our work, we need to invite a contractor.”

The official added that if the project is funded, it will continue quickly; he said: “The base of the wall is intact, and only the stone facades have collapsed over the years, and some of them have been broken.”

He admitted that the current demand of the temple, in order to overcome the present situation, is to organize the site, doe excavation and reconstruction, and said: “If we want the Anahita temple to be managed one day like the well-known Behistun, and the historic site of Taq-e Bostan, we need to be provided with funds for this site.”

Garavand said:  More than 2500 years have passed since the construction of Anahita Temple and 50 years since the archeological excavations, but unfortunately, in the last 20 years the reparation activities have stopped.  It is natural that a structure of this longevity needs to be continuously repaired, therefore continuously funded, in order to survive.”

Anahita Temple has been nationally registered as one of the first national monuments of Iran, with the number 31 on September 16, 1931. This temple is the second largest stone structure in the country after Persepolis, and it should be registered in the World Heritage Sites list. It is hoped that with more attention and restoration and excavation, the conditions will be created for this ancient site to be included in the UNESCO World Heritage List.

Anahita is the angel and guardian of water, abundance, beauty and fertility, and revered significantly by the ancient Iranians.