Today is Ram Izad day, the 21 day of the Zoroastrian calendar; 18 Tir 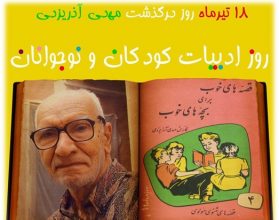 18th of Tir (9th July), the death anniversary of Mehdi Azar Yazdi, author of “Good Stories for Good Children”, has been registered as the “National Children’s Literature Day” in the country’s official calendar.

Mehdi Azar Yazdi (Azar Khorramshahi), the author with the largest circulated books in the history of children’s literature in Iran in the years before the Revolution of 1978, received the Royal Book of the Year Award and was able to obtain a plaque of appreciation from UNESCO in 1966 with the third volume of “Good Stories for Good Children.” The fourth and fifth volumes of this book were also recognized as unique books of the year by the Children’s Book Council in 1966 and 1967. In total, he has written more than 20 books for children. He wrote several volumes of “Good Stories for Good Children” and wrote “New Stories from Old Books” from “Sugar and Honey” and composed a story from “Smart Cat” and “Lazy Cat” for “Good Child” “Masnavi” and “simple stories”.

May loved these four books more than the others:  the poem “Sugar and Honey”, which is more about the hardships of life; Adam’s Child, which is the fourth section of “New Stories from Old books: “KHALEH gohar” which he wrote in 1974, in Shiraz for the literacy campaign, published there, and is 100% a true story, and “Lazy Cat” for which he did not get the permit to print and publish it, and from then onwards he did not write for many years because his books were not allowed to be published. At the age of 35, Azar Yazdi thought of writing a book for children and began his writing career in 1956 by writing the first volume of the collection “Good Stories for Good Children.” Before writing children’s stories, he attempted a variety of careers, including photography and bookselling.  For some time he worked in an academic printing house, then in Khavar, Ibn Sina and Amir Kabir bookstores, then in a translating and publishing agency, then in Ashofteh Newspaper and Etela-at Newspaper. For many years he was involved in correcting typed samples or correcting books. He never went to school, and at the age of 54, when he saw a class for the first time, he could not stop crying.

Azar Yazdi was born on March 1922 in the village of Khorramshah in Yazd. Until the age of twenty, he lived in the same place, which was one of the Zoroastrian neighborhoods of Yazd. Azar Yazdi fell in love with books from his childhood. The only regret of his life was when he did not have a book to read. At the age of 20 he switched from construction work to working in a sock weaving workshop in Yazd. After the sock weaving owner’s relative, who owned the only bookstore in Yazd, decided to open a second bookstore in the city, he took him from the workshop and put him in the bookstore.  Working in a bookstore gave him the opportunity to get acquainted with authors of poetry and literature.

Mehdi Azar Yazdi never married. Azar Yazdi died in the morning of Thursday, on July 9, 2009, due to lung disease in Atieh Hospital in Tehran. On July 12, after his funeral in Hzireh mosque, he was buried in the Hosseinieh of Khorramshah, Yazd, near his residence.

After he died in Yazd city, the Yazd Provincial Art Center, in cooperation with the post office, printed a commemorative stamp in 1600 numbers. In 2013, the Supreme Council of the Cultural Revolution, on the proposal of the Council of Public Culture, named July 9 as the “National Children’s Literature Day” in Iran.

Ram Izad, in the Mazdeyasni faith is the guardian of the twenty-first day of each month and is mentioned in the Avesta as “the provider of pasture and proper food.”

The word Ram means tame, happy, loyal, and it is still used in the same way or as tame in the sense of peace, happiness, and agreement. In this ritual, a yellow Matthiola flower has been dedicated to this god.

Ram or Izad Ram, which in Avesta is referred to as Ram or Ramen and in the Pahlavi language is read as Ramesh or the same Ram, in Zoroastrianism is one of the Izads or characters of worthy worship. This izad, who has also been called Vay veh, is committed with the twenty-first day of each month, called Ram’s day. The fourth day is nabor or abstinence from eating meat.

Next to Bahman (Vahman or Vohumana of Emshaspandan) are his three companions, the first of whom is Mah, the second Gaush, and the third Ram. Ram plays a unique role in the afterlife. In fact, in the afterlife, Ram helps the righteous and just spirits to overcome difficulties and restrictions. Ram is also an aspect of time. He was the first spiritual physician to be committed to the treatment of pain.