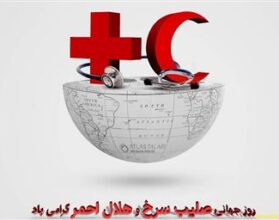 May 8 has been designated as the International Day of the Red Cross and Red Crescent. This international organization was established in 1864 to alleviate human suffering and protect and promote public health under the Geneva Conventions.

In 1862, the Swiss aid worker Jean-Henri Dunant published “A Memory of Solferino,” calling for volunteer aid societies to alleviate the suffering of war victims. “Shouldn’t there be facilities in times of peace and support groups with selfless and completely skilled volunteers aiming to care for the wounded in time of war?” He wrote.

The Geneva Association for Public Welfare accepted his proposal, resulting in an international conference with representatives from 16 countries in Geneva, an 1864 agreement to improve the war wounded, and signed by representatives of twelve participating governments. The Red Cross was organized and founded in Iran as the Red Lion Sun Society in 1922 with the efforts and pursuit of Dr. Amir Alam. Dr. Amir Alam, who was the director of health in Khorasan province, after the devastating Bojnourd earthquake, translated the rules set by the International Committee of the Red Cross for the populations and gave them to Ahmad Shah Qajar, the then King of Iran, for the King to read and take the preliminary steps for establishing a society in order to attract foreign aid in the event of natural disasters and catastrophic events. Based on this translated text, the charter of the Red Lion and Sun Society in Iran was written and signed in March 1922 by the Qajar crown prince, Mohammad Hassan Mirza.

This charter was prepared in 10 chapters and 60 articles and according to its introduction the honorary presidency was given to the crown prince.  The first formal meeting of the Society’s central committee was held in August 1923. After its founding, the Committee immediately became a member of the International Committee of the Red Cross and Red Crescent (IFRC) and the “Lion and sun” emblem was registered.

The first relief activities of the Lion and Sun population were during the relief work for the earthquake victims of Torbat-e Heydariyeh. The meeting of the central board of the institute, the formation of various population boards in some provinces of the country, and the establishment of a magazine as its official publication were other tasks that this population carried out in the first years of its formation.

In 1929, at the Society’s central board meeting, Hassan Mostofi al-Malak, a well-known politician, was elected as the chairman, and Dr. Amir Alam was elected as the first vice-chairman of the Jamiat. The members of the Central Committee were selected from among the founders and contributors to the Society at a public meeting.  In 1928, the first steps were taken to establish the Women’s Red Lion and sun Society.  In the years that followed the Society expanded its activities and in accordance with capacity of the members of the society it would extend aid to the disaster stricken and to the needy.  One such example is the aid extended to the earthquake stricken population of Shirvan, in 1929.

The day “Farvardin” which is pronounced Farvartan in Pahlavi, is derived from the word Afrortinam in the ancient Persian language, and means fravahar of the pure and pious.  Farvardin is same as fravahar. Fravahar is a particle of the divine light placed in everyone’s body to guide the soul to the right path. Fravahr never accepts pollution, and after the death of the body, the fravahar soared upwards and joined its source.

The 19th day of the month in the Zoroastrian calendar is named Farvardin.  It is derived from the word fravahar, meaning promoter and progressive. In ancient Iran, it was believed that a particle of this Ahura’s light was entrusted to every creature; this part was pure and without pollution initially and will always remain clear and will never take on any corruption and impurity. The ancients believed that fravahr was, in fact, the soul of the dead and believed that the souls of the dead would return to earth in the first days of spring with their relatives.

Fravahr, who is a part of the infinite existence of God, and is incarnated for the guidance of the spirit (ravan), joins his principle with the same purity and purity after death and is not tainted with the pollution of sin. According to Zoroastrians, in the body of every people, whether men or women, rich or poor, and is a particle of the divine light called “frah vahar”. This “fravahar” has been separated from its original origin, which is Ahura Mazda, and has settled in our body for a limited period of life. This divine power elevates us to great degrees and takes us from the animal and human state to the world of angels. In the end, after going through the stages, Minoyan guides us to the world of truth and identity and enjoys meeting and bonding with Ahuramazda.

The day of “Farvardin,” which is in the Pahlavi language of “Farvarten,” is called “Afrorti” in the ancient Persian language and is the day of the pure Farvardin and the fravahar of the pious. Although Farvardin is from the root of Parvardin, which has been changed to Farvardin, such as Pars and Fars, Pirooz, and Firooz, Parvardin is also called the month of growing flowers, plants, and trees because they grow again in this month.

Farvardin is the same as fravahar. Fravahar is a part of Ahura light placed in everyone’s body to guide the soul to the right path. Fravahar never accepts pollution, and after the death of the body, fravahar steps the excellent road and joins his source. Zoroastrians wear new clothes on this day and remember their dead. The amaranth is a symbol of this day in Zoroastrianism.