The late Ardeshir Jahanian was a great man who was the initiator of good deeds in his valuable and fruitful life, both for Zoroastrians and all Iranians, and it can even be said that he was a world-famous businessman. Ardeshir Jahanian, one of the noble and benevolent Zoroastrians, was raised in a family of merchants. His father was Goodarz Jahanian, one of the distinguished men of Yazd, the manager of Jahanian Trading House, and his mother was Lal Firooz.

Zoroastrians merchants who had extensive trade relations with the Parsees of India, played an essential role in the country’s economic affairs. The expansion of the global economy brought about a doubling of Iran’s trade growth, primarily since the Zoroastrians were known for their honesty and good deeds and were trusted by the people and the government of the time. Since Zoroastrian businesses were among the most important economic enterprises in Iran during the Qajar period. The establishment of famous trading houses such as Jamshidian, Jahanian, and Yegangi shows the economic power of Zoroastrians in this period of history.

A large part of history is hidden in the heart of the biographies of great and famous people. Ardeshir Jahanian had inherited the ambition of being a business man from his father. His father was a prominent businessman and one of the founders of the Jahanian Trade Center. Jahanian, a large family of Zoroastrian merchants in the late Qajar and early Pahlavi periods, were the ancestors of Shah Jahan family. Therefore his children Parviz, Khosrow, Rostam, Bahram, and Goodarz chose the Jahanian name for their family. Khosrow Shah Jahan and his brothers Parviz, Goodarz, Bahram, and Rostam, one of the great Zoroastrian landowners, founded the Jahanian Trade Center in Yazd in 1274 A.D., and their activities spread throughout Iran and beyond, beyond the borders of Iran. The Jahanian Brothers did an excellent job of trading and taking over the Iranian cotton trade. By sending packages in identical units to global markets. The Jahanian Trade Center was one of the most successful trading establishments of the Qajar period, with organized management and trade relations with foreign countries such as India, Britain, China, Sweden, and the United States, especially in cotton exports. With the expansion of business, the Jahanian brothers switched switched their business to money exchange and banking.  During the reign of Mozaffar-eddin Shah and the end of the Qajar period, the Jahanian Trade Center had extensive activities in Yazd, Isfahan, Shiraz, Kerman, Bandar Abbas, Rafsanjan and its representative offices in London and Mumbai. The Tehran branch was run by Goodarz Shah Jahan, Ardeshir Jahanian’s father, and another of his brothers. The reputation of this business was so excellent that its credits and cash receipts were as valid as banknotes and circulated. But the boom of Jahanian trade did not last long: the beginning of the Constitutional Revolution was the beginning of the end of the business and Jahanian banking. Many obstacles led to the bankruptcy of the Jahanian Trade Organization in 1912 AD.

In addition to trading, the Jahanian family also engaged in exchange and banking activities, so that this institution expanded the first non-governmental guaranteed check in Iran. In 1279, the Jahanian Bank was founded in Shiraz and opened branches in Tehran and other southern cities of Iran. Other economic activities of this family that can be mentioned:

Establishment of the first meat company, digging aqueducts and developing the lands of central cities of Iran such as Yazd, Rafsanjan, Kerman, and participating in the establishment of the first telephone joint-stock company. The available documents show many economic contacts between this family and the government, for instance Mozaffar Eddin shah often borrowed money for his foreign journeys and certain activities. Despite the rapid progress of the Jahanian family in economic affairs, their companies soon went bankrupt. Many reasons are given for this bankruptcy, numerous reasons were given for this bankruptcy, the most important of which was the threat to the interests of foreigners in Iran due to the people’s trust in the banking and commercial activities of Jahanian as a result the slowdown of the Russian and British banks businesses in Iran, which led to their reaction and plotting for Jahanian bankruptcy.

The movement to financially support the constitutionalist movement caused enmity of the authorities towards Jahanians, which ended up in the assassination of Parviz Shah Jahan, the Yazd Chamber of Commerce director, and Fereydoun Khosrow Ahrestani, the director of the Tehran Chamber of Commerce, and the deportation of Khosrow Shah Jahan, the general manager. These assassinations made the Parsees of India, who intended to invest in the newly established Bank Melli, to back down from their decision. Consequently, the company disintegrated and foreign banks took advantage of the situation and stopped giving credits and this cessation brought complete bankruptcy for the Trading House in 1913. Jahanian Trading House, with its proud history, was finally confiscated by the security guard in 1980, and in 2015 it was completely destroyed and its garden of trees was fully cut down overnight.

After bankruptcy of the Jahanian family, only some of them, such as Goodarz, continued their economic activity, but the credit of the past was never gained again. Most of the descendants of the family went abroad, especially to the United States and Canada. One of the most important members of this family is Ardeshir Jahanian, the editor of the Hukhta monthly journal. Ardeshir Jahanian started the Mehr Ayin Company in 1987 in the building of Jahanian (father and uncle) Trading House. After that, he renamed the trading house to the trading house of Ardeshir and partners. Ardeshir Jahanian became the first import agency for siemens products in Iran, and in his Trading House, which was known by some as Electrophone (electro telephone), he offered Siemens telecommunication devices to customers. He also represented the import of Belgian crystals in collaboration with Belgian companies. Shah Jahan took Goodarz as his surname.  The other two brothers, Fereydoon and Mehraban, chose Varza as their surname. The other two brothers, Fereydoun and Mehraban, chose Varza’s family name, and Ardeshir kept the name of the Jahanian because his identity card was issued from Qazvin. These four brothers decided to establish different companies in Tehran so that the former name, Jahanian, would remain on these companies. The change of surname was only for the bankruptcy of Jahanian Company in Yazd. They started their new life by moving to Tehran, and by taking loans, with joint efforts and strong unity, started off their Lalezar-Ferdowsi companies.

A good name will not be forgotten

In doing good deeds, our ancestors thought only of the prosperity of society. Seventy-four years ago, Ardeshir Jahanian and his brothers, Shah Jahan Goodarz, Fereydoun Varza, and Mehraban Varza, the sons of the late Goodarz Shah Jahan Jahanian, in the name of their father, founded the Goodarz Endowment Hospital, one of the oldest and fully private health centers in Yazd province, which was endowed in 1947. The mentioned building was built on their inherited land. The construction cost was paid by the living children of the late Goodarz Shah Jan Jahanian. In 1988, the hospital was under the coverage of the Shahid Sadoughi University of Medical Sciences. Since 1988 the endowment and Charity Affairs Department of Yazd province is in charge, and its managed upto date in the same way. At that time, they hired doctors from Germany and Austria. Goodarz Hospital provided free beds to those low-income patients who were introduced by the Yazd County Health Department and the hospital’s supervisory board. Low-income Zoroastrians now enjoy this privilege by presenting a letter of recommendation from Yazd Zoroastrian Association. Laal Firooz Maternity Hospital is also one of the charitable heritages of Ardeshir Jahanian and his brothers.

The history of Iran and the world is closely tied to the lives of philanthropic characters, who have taken huge steps in construction and other good deeds. Ardeshir Jahanian was one of the most famous personalities of the Zoroastrian history, who, with his life-long efforts, had a dynamic and positive impact on the Zoroastrian society and on his homeland, and in the economic and cultural scene, he left behind a good name. He was editor of Hukht monthly journal, vice President of the Tehran Zoroastrian Association and the writer of religious books. In 1962, when he was a member of the religious and cultural commission of the Zoroastrian Association of Tehran, he suggested the establishment of the Zoroastrian World Congress on his leadership, and the board of directors accepted it. The Zoroastrian World congress already has many supporters from different countries.  In 1991, at the invitation of UNESCO, he gave a speech in the Ferdowsi World Congress in Iran.  He then wrote and published a book named “Ferdowsi’s Advice”.  Till the end of his life he worked hard for the Association to get the rights of Zoroastrians. He regularly expressed his views on improving the position of Zoroastrians by participating in the research of mobeds. His wife, the educated lady, Sarvar Sarfenia, received her diploma from an English school in Yazd, when girls rarely went to school. The late Ardeshir Jahanian always believed that Zoroastrians, with this small number, should strive for progress in life by acquiring experience and efficiency. Ardeshir Jahanian had eight children, five girls, and three boys. The fact that his seven children have higher education is proof of this idea. Two boys and a girl are physicians.  One of his sons as a doctorate in computer science. Forty-six years ago, he sent his last daughter, Parichehr, to study in the United States.

Ardeshir Jahanian was born in 1916 and passed away on January 21, 1999. During his prolific and valuable life, he published four books entitled “Achaemenid Religion” published in 1962, “Zoroastrian Life” in 1971, twenty articles on the foundations of the Zoroastrian religion in 1984, and the book “Essentials of History, Awareness of the Founders of Civilization” written in 1986. 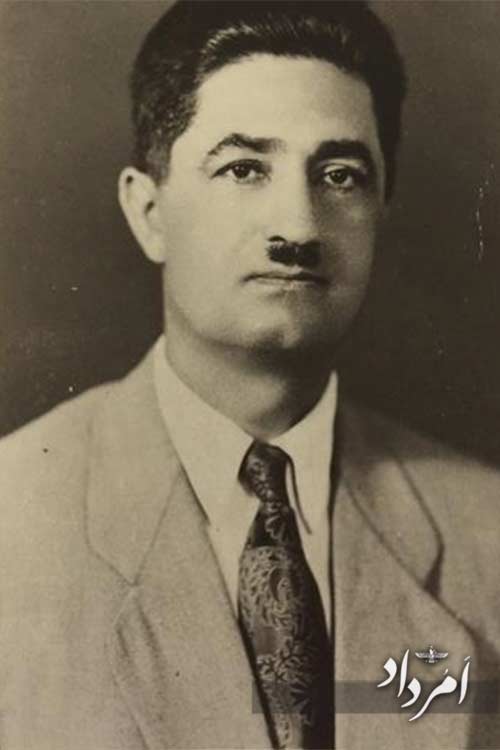 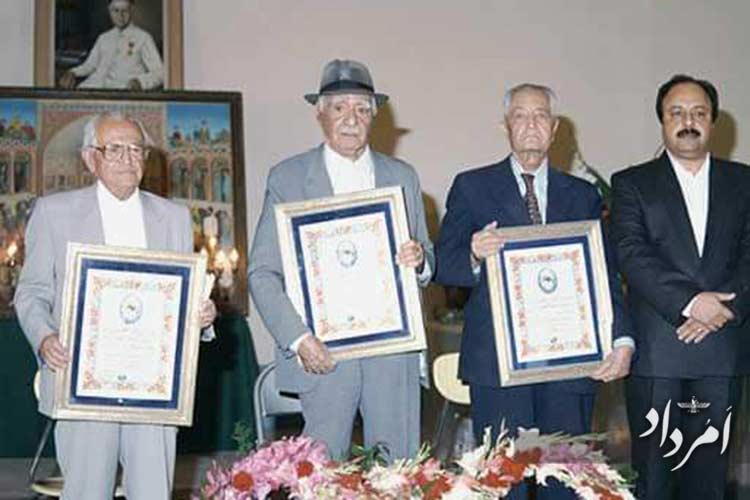