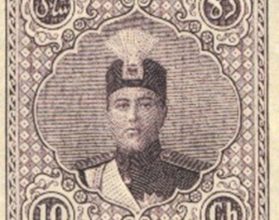 We do not remember the last time we wrote and posted a letter to a friend. Would it reach its destination, or not?  Was it read, or not?  How fast memories start fading, as though they never existed, or maybe the passing of time removed them and took them away.  Letters had stamps as seals, so beautiful that we felt them light us up with their beauty.  We would lick the back side of the stamp.  It was sticky and the taste gave the feeling of happiness itself.  Then we would stick the wet stamps on the envelope and press it hard to make sure it’s stuck. All we had to do was go to the end of the street and put the letter in the mailbox, and wait for the answer. What a hard and sweet feeling of waiting!  Restless and full of anticipation.  Since when did we taste the happiness of having these small, toothed and colorful stamps stuck on our letters? Its story goes back into history.

Until the beginning of the reign of Nasser al-Din Shah Qajar, administrative letters had government stamps, and if they were very official and formal, Russian stamps were put on them.  Iran did not have any stamp of its own.  The strangeness of affixing Russian stamps on letter written in Persian prompted the government to send a group to Paris to find a way to print Iranian stamps by consulting the French.  There was no other way.  Foreigners had progressed with the speed of light and we were so much behind and need new tools and devices, therefore we needed stamps.  The one good thing about the French people was that, unlike the British and Russians, they were not so ungrateful to plunder our resource in exchange for any little help or guidance. The French took the Iranian group to a stamp expert named Albert Barr and helped bring to Tehran a sample of the stamps he had provided bearing the name and logo of the Iranian government. The stamps had the image of a standing lion with a bright sun shining behind it; It means the same symbol of the ancient Persian lion and sun. On these stamps was printed:  “The postage of the protected states of Iran”. The stamps were available in four colors: purple, green, blue, and red, and cost from 1 to 8 shahi (Iranian currency).

Nasser al-Din Shah reigned for fifty years. Iranian experienced many good and bad things during his reign and came to know of new innovations in the world.  In order to organize the Iranian postal service, the Qajar king ordered to hire an Austrian named Riedrer and bring him to Tehran and entrust him with this task.  When Reidrer arrived he was asked to start work without any waste of time.  It was not becoming of the government not to have a stamp with symbol of lion and sun.  Reidrer became popular as “Monsieur” because the two repeated “r”s at the end of his name made it difficult for the Iranians to pronounce his name.  He ordered and printed 120,000 stamps.  Reidrer succeeded to organize the postal service of Iran and print stamps.  But, he was not a very honest man.  In spite of the respect and appreciation that the Iranian authorities showed towards him, he secretly took away with him many expensive stamps, out of the sight of the government of Iran. However, the Iranian government had done all it could to respect him. He took a several precious one Qerani stamps secretly from the government and sent them to Austria.

During the reign of Nasser Eddin shah Iranian stamps were printed in Austria’s state printing house in Vienna, and were delivered to Iran in packages. Most of the stamps had a picture of Nasser al-Din Shah, which was smaller than usual, in order to show the King’s twisted mustache! Some stamps showed the king’s face inside a circle. The sign of the lion and the sun could be seen in all of them.

At that time, some Iranian stamps were printed in Holland, and today’s collectors know these stamps as “golden Nasserite” stamps.  Stamp experts consider this group of stamps to be among the most beautiful and elegant classic stamps at a global level, and collectors go crazy to have them.  Nasser Eddin shah’s government was unlikely to have such a good taste; either it was just an accident, or it was the art of the Dutch printing press.  We say this because when Nasser Eddin shah ordered to have stamps printed in Iran, when the stamps turned out with not-so-good print and unclear letters, instead of putting them aside and printing new ones, the same stamps were used to print another image on its back.  This lack of taste led to the printing of ugly looking stamps.  Stamp collectors do not buy these two-sided and ugly stamps, even for free.

There are two other points about Nasser al-Din Shahi’s stamps that should not to be left untold. One is that only 28 years after the printing and distribution of the world’s first stamp, we also became stamp owners. This is a privilege that we can be proud of in the world of stamps and stamping. Another is that in the same Nasserite period, envelopes with the emblem of 5 shahi stamps were printed. Iran’s first postcard was published at the same time. These postcards also had a picture of Nasser Eddin Shah (as if Iran had no other symbols of historic value to be printed on stamps except the face of Nasser Eddin Shah).  Who knows?  Perhaps it was this repetitive sight of these stamps that made Mirza Reza Kermani, who wrote petitions and letters everywhere (using these stamps) and complaining about his hard times, assassinate Nasser Eddin shah. Well, maybe it wasn’t right to do this, but perhaps he was so tired of looking constantly at the face of Nasser Eddin Shah on the stamps that he used every day!

During the reign of Muzaffar al-Din Shah Qajar, three sets of stamps were printed. His successor, Mohammad Ali Shah, whose reign was only two years, ordered the Dutch to print 50 Qerani stamps. Noticing that Mohammad Ali shah wasn’t sharp enough, the Dutch cheated him and charged 3500 francs for the cliché of the ordered stamps.

Ahmad Shah, the last Shah of Qajar, also printed stamps. The first of these is known as “crowning stamps” and shows the image of the 12-year-old king. The stamps, published in the Netherlands, arrived in Tehran a few months after the Shah’s coronation. Other stamps from this period had the advantage of having the image of Fravahar on one of them and Persepolis on many others, and these were actually very beautiful.

A point or two is worth mentioning here:  During the Qajar period, besides printing of stamps, Iran became member of the world postal union.  And, also, the number of the variety of stamps printed from the time of Nasser Eddin Shah upto the end of Qajar dynasty’s reign, reached 601.  During that period counterfeit stamps were also printed, away from the sight of the governments, which has another story of its own.  One example is:  the paper used for printing stamps was white, but after printing these sheets were boiled in saffron water to get the color of yellow, that the government stamps had.  Unfortunately, some played such tricks, where it was for stamps or for other purposes.

Members of the executive board were selected