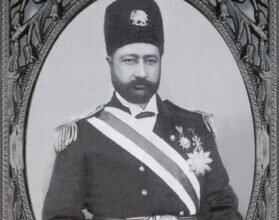 Today is the blessed day of Mah Izad and the month of Shahrivar, Nabor day, the day of abstention from eating meat, in the year 3759 Zoroastrian calendar, Sunday, the 12th of Shahrivar, 1400, August 29, 2021 AD.

On this day 98 years ago, on 7th Shahrivar, Ahmad Khan Daryabeigi, the first commander of Iran’s newly established navy, a politician, translator and writer, passed away.  He re-annexed Bandar Lengeh to Iran.

Daryabiegi graduated from Dar al-Fonun school with a degree in military and engineering. His research in 1305 (lunar calendar) laid the grounds for the official sovereignty of Iran over the three islands of Abu Musa, and the Large and Small Tomb.  After that, for the first time during the reign of Nasser Eddin Shah of Qajar, as the commander of the new Iranian navy in the Persian Gulf, he took command of Persepolis ship, in Bushehr, which Iran had bought from Germany, and also designed the navy uniform. Then, in 1310, nearly 22 years before World War I, he was appointed ruler of Bushehr and the ports and islands of the Persian Gulf and Oman.

In Shawwal 1316 (lunar calendar) he recaptured Bandar Lengeh and brought it back under Iran’s rule. In May 1317, he founded the first new-style school in the south of Iran and the Persian Gulf region called “Saadat” in Bushehr. He translated and published the books of Decameron by Giovanni Boccaccio and the novel by Augustine Eugene Scribe from France before the Constitutional Revolution between 1318 and 1322. During the constitutional revolution, he accompanied personalities like Sardar Asad Bakhtiari, but he acted against persons like Morteza Mojtahed Ahrami “Alam al-Huda” and Abdul Hussein Lari, and at one time, he was under the wrath of Mohammad Kazem Khorasani. The Women’s Association, which was held in the house of Mohammad Khan and his brother Mohammad Hussein Khan (supervisor of the Qajar court from Nasser al-Din to Ahmad Shah), had become the biggest problem for fundamentalists.  He governed over Bushehr and the southern ports of the Persian Gulf for several consecutive cycles, until a little after WWI. The last period of his rule ended by order of the government of the coup d’etat of 1299 in 1300 after Ahmad Shah’s visit to Bushehr. Ahmad Daryabeigi died on the 7th of Shahrivar 1302 solar.

The moon, called “Maunga” in Avesta is as worthy of praise as the sun. In our mythology, the moon is the creator of the purebred horses. In the prayer “Mah Yasht”, this Izad is the protector of all plants. This day is one of the 4 days for abstaining from eating meat. On this day Zoroastrians recite the “Mah Niyayesh prayer.”

The 12th day of the Zoroastrian 20-day month is called “Mah” (Moon) and every 30 days, forming a month, is called “Mah”. The moon is the name of a planet, which in Persian literature, is called maunga, and in Avesta is the 7th Yasht of the month. Mah Niyayesh prayers is all about Mah Yasht.

In Avesta, caring for useful animals is encouraged. Animals that should not be killed are dogs, cats, lamb and goats and horses, etc., and in their old age they should be taken care of. Zoroastrians are encouraged to kill destructive and harmful animals.

In Zoroastrianism, killing destructive and harmful animals is ordered.